In spring 2010 I collected this Carpinus Betulus from nature. The first year after collection he received all the care and lots of rest. Next to the appropriate position with a moderate amount of sun, good drainage substrate and a fertilization with organic fertilizers, I used for the first time Safe Bonsai Root Growth Stimulants, which seems to worked quite well.


Due to the good condition of the tree in next spring, I decided to make two activities at simultaneously, the first styling and transplantation of the tree in the first pot. The styling at that stage was more or less only focused on the removal of thick branches and designing the big wounds that were caused by removal of branches. The branches that were on the tree at the beginning ware to big, without movement and proper narrowing, the angle of which they grew from the trunk has been improper. With one word, they were not appropriate, so I decided to develop them totally form scratch and just keep the trunk and the young branches, which were developed in the first year after collection.

After this procedure the Carpinus responded with good growth, which was strong but less intense than the previous year. I assume that this was mainly due to re-transplantation into another pot and the decrease of root mass.


Since the tree showed enough power and good shape in autumn, I made the second styling a few days ago in the group workshop at TORA. At the second styling it was time to select the primary branches and positioning them. I worked on the branch selection, to some point during the last growing season. New branches or shoots, which were completely inappropriate placed ware immediately removed so the branches that were left on the tree, could get more energy and develop quicker.

Given the fact, that this is a pretty classic case of a formal upright design style, which by itself has no interesting design elements that may be a central design element, or a specific focus point which is interesting and you want to show it in the overall designing as a main element of interest, I believe it is very important that the design of such tree is idealized.
At this moment and the current stage of my knowledge level, for me this means that the narrowing of the trunk is good, that the nebari is exposed to the best point of view, that the branches have just the right dynamic that they have adequate movement and narrowing and they have of course a good ramification and structure. Of course all that has to be well balanced with the overall picture of the tree.
After the second design the tree is slowly showing a silhouette of the final design, but at that stage it needs some additional years of development. At the current stage I can make a brief analysis of individual elements of the tree, which I will use as guidelines for further development.


The base for primary branches is set. Branches are currently too thin and in most cases too short. A lot of time is needed for new branch development. But such way of developing has some significant advantages. The branches can be developed exactly where we want them (with a bit of luck and without grafting). It is possible to develop them gradually, which means the possibility of designing the desired movement of the branches, you are also able to achieve the needed narrowing for each individual branch, which makes a good branch structure. 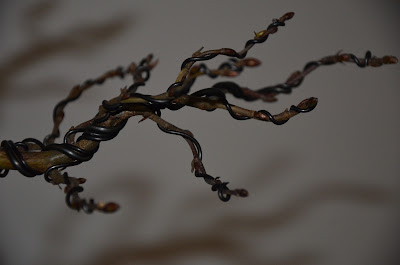 The pot made by Erin Bonsai is suitable and I believe the tree will stay in this pot, only the angle at which the tree is planted in the pot will be changed. The Nebari is also solid, but has to be better highlighted. 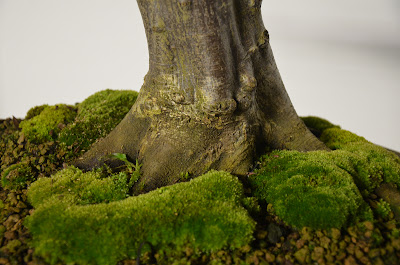 The top of the tree is currently too high. I left it longer for two reasons. The first reason is that while it is longer it will become stronger and thicker much faster. The second reason is that I will define the end height of the tree in accordance with the overall picture and the length and thickness of the branches, which also still in development.
And somehow this will be my guidelines for future development. In a few years the tree can become a nice and convincing small tree.
Avtor Unknown ob 6:50 AM